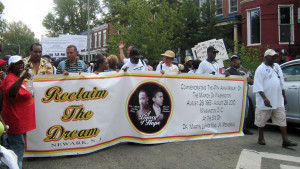 As I was strolling through articles doing some research, I came upon an article about why Black History Month should be used to sing the praises of unsung heroes. One of the articles I read was accompanied by a picture of a woman holding up a sign that said very simply, “Reclaim the Dream.” Ever curious, I decided to see if there was any movement or deeper meaning behind that little sign. I found that “reclaim the dream” is actually increasing in frequency as a statement (or perhaps a demand) throughout the African American community. I found a website called ReclaimtheDream, An old press release from the National Action Network in 2010 invited everyone to reclaim the dream.

Perhaps it’s because we so recently marked Martin Luther King Day, but I find this simple statement to be particularly poignant because it insinuates that the dream MLK told the world about has been lost somehow. Reclaiming means it has been unclaimed.

This month is Black History Month. Throughout the month of February we will celebrate the lives and accomplishments of African Americans. We will hopefully learn about great people whom we had not heard of before, and we will continue to stand in awe in the legacy of people like Sojourner Truth, Harriet Tubman, Thurgood Marshall, Martin Luther King, Ralph Abernathy, and others. To me, however, this seems like a great time for your cause, no matter what it is, to try to contribute to the idea of reclaiming the dream. Rather than simply going through the motions of talking about famous African Americans because it’s the month heretofore ordained for such things, I’d love to see causes really reach out this month and try to bridge any gaps that might exist in the structure of that organization.

How can your cause participate in reaching an objective like this? If your cause tends to help a predominantly white or predominantly Black demographic, reach out and see if you can team up to help as many people *together* as possible. If your cause is tied to a specific religious affiliation, perhaps try to put together an activity with another cause tied to a completely different religious affiliation. If your cause helps a specific part of the world, tag team with another cause that helps another specific region. Teach each other about the part of the world you’re helping.

Although MLK’s “I have a dream” speech predominantly focused on bringing the races together and seeing peace and equality reign in states like Alabama and Mississippi, I think he would be just as happy to see rifts between ethnic and religious groups close up and heal. Ultimately, Martin Luther King dreamed of equality for all people, where skin color, creed, style of dress, and other external facets of a person’s life didn’t matter as much as what they carried inside.

This February, to honor Martin Luther King’s dream and to give credence to the idea of reclaiming that dream, I invite you to ponder how your own organization could strive toward making that dream of equality for all come true. How can you help to heal all of the racial, ethnic, and religious tensions present in our country and in our world today? Your one organization will not be able to cure everything. But imagine if every cause tried to do one little thing this month – or this year – to make Martin Luther King’s dream come true. That could truly be something to see.