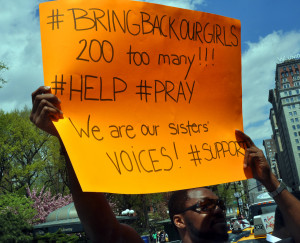 On April 15, 2014, 230 girls were kidnapped from the Chibok Government Secondary School. That’s 230 girls who were trying to learn. That’s 2014 AD, mind you, not BC. It is hard to believe. Amidst the tragedy, however, people around the world have been showing how social media can be used to push forward a cause that is beyond important. While one would hope that no one would ever have to deal with a catastrophe like this, the #BringBackOurGirls campaign is doing an awful lot right. We can learn from those steps. Here are, to me, what the highlights of their campaign are.

Often causes will name themselves based very specifically on what their cause is about. It would have been easy for the cause organizers in this case to call the effort “Bring back the girls from Chibok” or “Save Nigeria’s Girls.” By calling the cause Bring Back *OUR* Girls everyone who participates in the effort will feel that they are being personally impacted, which we indeed should all feel in order to prevent this from ever happening again.

Remind people that your cause is not going to affect just a small group of people. Show people how their participation can be significant.

Many causes focus almost exclusively on a fundraising message or on a “we accomplished this” message. The BringBackOurGirls Twitter account does a good job of covering the latest news while focusing predominantly on calls-to-action. The tweets are easy to share because they are short for the most part, another smart social media approach by this organization. The account does not leave room for what has come to be called “Slacktivism.” You can’t simply follow the account, change your profile picture, and think you’re done. The account regularly tweets action items that they really want you to do, not just share.

Like the Twitter account, the Facebook Page is not just about attracting “likes” or shares. The page repeatedly shares the action items the organization wants you to take, and the name of the cause tied to those steps strengthens the enticement to take those actions. The only weakness in the organization’s effort is that it is not interacting with the many people who are leaving comments on the page. Building solidarity with people who are sharing your cause is extremely important in the online world.

Finally, the #BringBackOurGirls campaign is doing an excelling job of building a bridge between the world of social media and the real world, where their efforts are truly needed. Most notable is that the Facebook Page of the organization is willing to set up an events page for your local rally/march and they will help promote your event as well. This also entices people to join up with the main cause, and it creates that solidarity within the organization and between the organization and its supporters.

One would wish most, of course, that there would be no need for a group like BringBackOurGirls. However, it is amazing how quickly—and how well—the cause has pulled together. There is a lot we can learn from them.